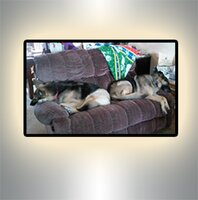 Sisters to the core from day one. They were the best dogs. They played in the back yard with each other all the time. Bogey preferring stuffed things and Alley preferring balls of all sizes, her favorite a large horse ball. The latter she brought into the living room many times. Throughout their lives they each were Queen of something, Alley the backyard where she laid for hours surveying everything and Bogey, the house where she watched for the squirrel and the delivery men. Strange how they both knew the sound of Dad’s motorcycle and his car. Girls love daddy best and dogs are the same. They were the best office assistants during the pandemic and it took a little for them getting used to us invading their world. But soon they were happy about it all.

Unfortunately, as with Shepherd/Huskey dogs their hips and back legs were failing them and soon they could no longer climb the stairs to bed. Nice dog beds occupied the living room floor, or they were on the couch. No matter, as long as they were happy.

Again, I think they were two of the most spoiled puppies ever. I made their dog food with homemade chicken soup, and they got the best treats.

So it was with utter sadness that we said goodbye to both. They came into this world together and were going out the same way. Alley and Bogey, you will be sorely missed. We love you.