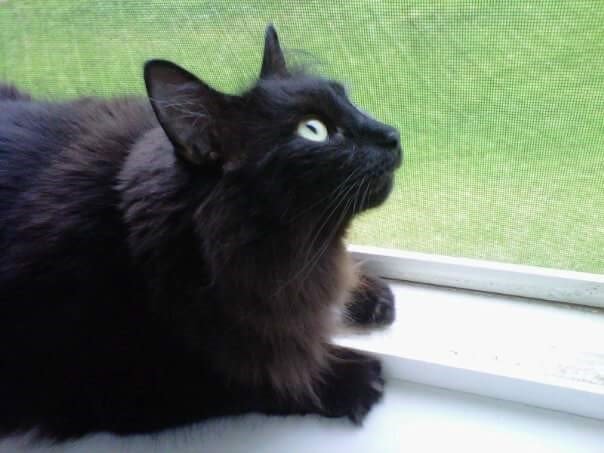 Please share a memory of Surge to include in a keepsake book for family and friends.
View Tribute Book

My senior year of college, the first time living off campus (in Fort Wayne, Indiana) I was outside smoking a cigarette on my porch, late September around 8 or 9pm two tiny black kittens were playing what seemed to be hide and go seek in the bushes. One of the curious cats was brave enough to start swirling around my legs. I pet her and every time I would stop she would meow at me. About a week went by and this continued every night. Some days when it got too late I wondered if I would see her but she always came by. I started feeding her and so did the Jamaican lady upstairs. I finally decided she was too cute and it was beginning to get cold, I ought to take her in. I asked the lady upstairs if she had any intent on capturing the cute feral kitty she just was feeding it like me, she said no. I dialed up my parents to make sure after I finished school she could come home with me. Then one night, in the carrier she went. Her name would be Sage because of her pretty green eyes. I took her to the vet where she got all the fleas and ear mites taken care of as well as her first shots. She learned very quickly for being an outdoor cat. She learned to use the litter box without me even teaching her. Soon I took her to get spayed. When I called to check up on her they said he was fine. Wait what? HE got neutered. All this time I thought I had a girl cat I had a boy cat. I couldn’t still name him Sage but he already knew his name. Sure it was kind of gender neutral but I associated Sage with my little girl. Nope, he needed a strong boy name. He was a little bolt of energy so Grampy named him, Surge. Surge, it was. Surge was feisty and smart as a kitten. The vet said he was probably about 6 months old when he showed up on my doorstep. He used to drink the milk out of the bottom of my cereal bowl. We travelled across country back to my parents together after I graduated. He mainly hid under the drivers seat. As I said used his litter box without being taught. Even when I got a whole new system in NY. I changed from regular clay litter to Tidy Cats Breeze and I was supposed to mix the two together for a week so he could get use to it. Of course, I didn’t read the directions but he knew what to do. He loved his strawberry bean filled cat nip toy. He would roll around and play with it for fifteen minutes easily. He loved little mice. He taught himself how to play fetch and would frequently leave me little mice in my bed. He survived a house fire after being trapped two hours. He knew how to open doors(Grammy nicknamed him Houdini). He helped me through 2 surgeries, a roll over car accident, multiple difficult break-ups and brought me so much joy on just plain rough work days. He was as soft and fuzzy as a bunny. He didn’t mind being dressed in t-shirts whether he had to be because he over groomed himself or simply because he looked precious in them. He even wore Halloween costumes with his Uncle Louie. He wore his cone like a champ and never threw tantrums when I had to put it on. He always knew I was trying to fix the boo-boo’s. He never bit or hissed when Daddy or I wiped his paws. He was still spunky and silly in adulthood but then such a cuddle monster. He loved laying on people’s chests and listening to their heartbeat(especially his Uncle Sal’s). Even at 11 years old he learned new tricks from his Dad. ‘Sit’, ‘stay,’ and was starting to get the hang of ‘lay’. He loved to watch birds and squirrels from his perch. Before he had a perch he would sit on his hind legs like a meercat and watch out the window. He was brilliant and loving. He was my fur-baby. Until we meet again baby boy. Mommy loves you SO immensely. I am so sorry this happened. I wish I could have prevented it. I would do anything for you to crawl on me, press on my ribs with your paws. Yes it hurt but not nearly as bad as losing you has. I’ll miss you forever, Surgey poo.

To plant a beautiful memorial tree in memory of Surge Barrese, please visit our Tree Store

A Memorial Tree was planted for Surge
We are deeply sorry for your loss ~ the staff at Paul W. Harris Funeral Home
Join in honoring their life - plant a memorial tree
Online Memory & Photo Sharing Event
Online Event
About this Event

Look inside to read what others have shared
Family and friends are coming together online to create a special keepsake. Every memory left on the online obituary will be automatically included in this book.
View Tribute Book
Share A Memory
Plant a Tree