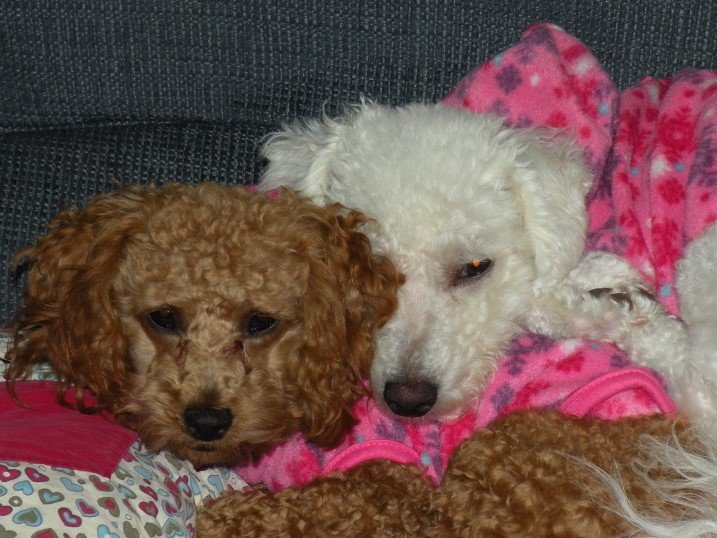 Please share a memory of Phoebe to include in a keepsake book for family and friends.
View Tribute Book

Sweet Miss Phoebe. She started out a little white ball of crazy fluff, characteristic of a bichon frise puppy. In choosing her name, Phylis was considered because of her crazy look resembling the famous Phylis Diller. We decided on Phoebe and she most recently was given the beautiful distinction of "Miss Phoebe". As a small pup she bonded most closely with our poodle, Stella. She and Stella were inseparable. Wherever Stella went, there was Phoebe. They snuggled up close when sleeping and needed to accompany each other to the vet and groomers. In her early days as a pup she loved cats. She seemed to prefer to play with them rather than the number of dogs that shared her home. She would perch herself on the back of the sofa in solidarity with her feline friends. In these most recent years it seemed she might want to chase these cute kitties, but I do believe she only wanted to play with those beautiful creatures. Phoebe shared her life and love with other dogs, cats, children and two other families. She has most recently been called the "up pup", loving the warmth of a lap. She would also snuggle into her favorite bed and was lovingly covered up by the one she adored. She had a love of guitars, or more specifically, the man who played them. She loved her "pup goodies" and waited expectantly for one when coming in from doing her business. Miss Phoebe fought so hard to stay with the ones she loved and there were many who fought this battle with her. She gained many loving friends in the process. In the end, her illness was more than her tired body could bare. Even on her last day here she eagerly accepted her "pup goodies" and turned her head to the sound of a cat's meow. We said our goodbyes whispering softly, "You're such a good pup. We're going to miss you but its time for you to go and be with Stella." God speed our sweet Miss Phoebe. You will forever live in our hearts.

To plant a beautiful memorial tree in memory of Phoebe Stephens, please visit our Tree Store

A Memorial Tree was planted for Phoebe
We are deeply sorry for your loss ~ the staff at Paul W. Harris Funeral Home
Join in honoring their life - plant a memorial tree
Online Memory & Photo Sharing Event
Online Event
About this Event

Look inside to read what others have shared
Family and friends are coming together online to create a special keepsake. Every memory left on the online obituary will be automatically included in this book.
View Tribute Book
Share Your Memory of
Phoebe
Upload Your Memory View All Memories
Be the first to upload a memory!
Share A Memory
Plant a Tree